skip to main | skip to sidebar

It's been six months since my previous post.  Why?  Covid has made the days feel like they've combined into one long, dark, miserable day.  I'm sure you all feel my pain.

I wasn't sure exactly what I was going to write about until I realized I should mention my Dreon family.  They have been a special challenge.  First, not too many people are interested in them.  My immigrant ancestor, George, supposedly came here during the Revolution from France, though I can find no documents on him from the time.  And yet, his son, William, was born in Virginia in about 1785, so I do know he was here. Second, online access to records that pertain to early family members are rare.  I feel confident that there are records, but they are pretty far back on my tree and I do not have the resources to research all of my family names to as great of detail as I'd like.  And third, my immigrant ancestor had a lot of female descendants, and so while there may be a great many living descendants, they are likely unaware of the family name.

I put some of what I do know about George Dreon and his wife Mary on Find-A-Grave.  As I stated, George was from France and his son (my ancestor) and likely first child, William, was born in Virginia. What I do not know is whereabouts in Virginia the family lived.   I do know that the family was living in Logan County, Kentucky circa 1805.  What I do not know is whether the Dreon family moved to Kentucky or if the state formed while the family was already there.

I hesitate to say more, although I do know a bit more.  I can also speculate some on where they may have lived in Virginia, but I have found that speculation is often copied and posted as fact in online trees.

My interest in this branch is not so much in finding out more about George's ancestry, but rather his life here.

Found out my husband's family was from a little place in Hiroshima prefecture called Niho-jima.  I've been having so much fun with researching his side.  Nothing was known of them, but thanks to a friend of my cousin who translated a family tree, I have more than I'd ever dream.  Part of what makes genealogy fun is finding something that nobody else has yet discovered.
Posted by Jeannie at 8:15 AM 0 comments

Six years have passed since my last post.  Blogs have fallen somewhat out of fashion, but my genealogy research has remained very strong.

An update on Henry Weaver Van Syckle's ancestry:  After his mother, Mary Ann (nee Burger), married Mr. Van Syckle, she married one Abram Williams and had several children.  In about 1849 the family moved from New York to LaPorte County, Indiana.  After the death of Abram Williams circa 1852, the family then relocated to California, where Mary Ann married one Dr. Bradley in Colusa County.  The last record I have found of Mary Ann is still the 1880 Federal Census in San Jose, Santa Clara County, California.*  She is listed as Van Syckle.

"A self-made man and one of the most successful and highly esteemed ranchers of Colusa County, Solomon Hasbrook Williams has a high standing as a public-spirited and progressive citizen.  He was born in the Hoosier State, near South Bend, April 1, 1852, the youngest of five sons and one daughter born to his parents.  The father died when his son was an infant; and in 1860 the mother brought her daughter and three sons to California, by way of Panama.  They settled in San Francisco for a time, and then came to Princeton, Colusa County, where they engaged in the stock business.  It was while living here that Mrs. Williams married Dr. Bradley, her third husband.  Her first husband was a Mr. Van Sickle, to whom she bore three children, all of whom are deceased..."

I believe other Burger relatives moved with the Van Syckle/Burger/Williams clan to Indiana from New York.  Almira Burger (c.1834-1891), married (1) Daniel Davis and (2) James N. Coulter.  Almira's oldest two children were born in LaPorte County, Indiana.  By 1860, the family was in Warren County, Iowa, where another Burger lived.  Abraham Solomon Hasbrook Burger was born in Orange County, New York in 1830, and lived in Warren County, Iowa for several decades.  It is likely that he and Almira Burger were siblings.

Almira Burger's marriage record to Daniel Davis lists her parents as William Burger and Mary Deets.  There's a lot of conflicting information on them online, and so for now, I have put a big question mark on these people's ancestry, but I do lean toward Almira Burger, Abraham Solomon Hasbrook Burger, and Mary Ann Burger, all being children of William Burger and Mary Deets.  At the very least, I have no doubt that they are somehow related.

*UPDATE:  I'm under the weather, a bit stressed, and I never sleep well when the clocks change for Daylight Savings.  Genealogy is always my late night companion.  I'm so grateful for my insomnia this time because I found the obituary for Henry Weaver Van Syckle's mother, Mrs. Mary A. Bradley.

I see that it has been a while since I have posted.  With all of work I do to maintain my Van Sickle Family site at Facebook, I tend to neglect the blogs.  I am tempted to make a resolution to post regularly, but I have other genealogy resolutions in mind:

1.  I have no ancestral information on my 4th generation grandmother, Mrs. Alce WORSHAM (nee JOHNSON).  I really need to do some digging into the JOHNSON family in Pike County, Missouri circa 1820.  That is awfully early in Missouri history.  Coupled with the fact that Johnson is such a common surname, I definitely have a challenge ahead of me.

2.   There are tons of records that I need to order for my BROWN family in Cedar County, Missouri.  The courthouse there was nearly destroyed completely in a tornado about 10 years ago.  I've had some trouble locating some records since that time.

3.  I really want to understand the lives of my Anabaptist ancestors.  My Brethren family was quite modern compared to Old Order Amish and Old Order Mennonite groups, but that was not always the case.  I am somewhat familiar with how my family help establish Brethren churches in Indiana and Missouri (see:  History of the Church of the Brethren in Indiana.  My 4th generation grandparents were Jacob and Hannah RONK).  I know too that many in the church struggled with the modernization of society that began in the 19th century.  Was this true for my family?  I'd love to read, "The Brethren During the Age of World War", but did you see the price?  Wow!

4.  Speaking of Mrs. Hannah RONK, her parents were Thomas and Nancy (nee DEVER) BROTHERS.  Who are Nancy's parents?  And does her DEVER branch somehow connect with my other DEVER branch- Henry and Elizabeth (nee MILES) DEVER of Hardin County, Kentucky?  I need to find some documentation!!!

What genealogy resolutions do you have for this year?
Posted by Jeannie at 11:02 PM 5 comments

I've been having fun playing with the Predict Eye Color at GEDmatch.  By uploading the results of my DNA test (which I took through Ancestry.com), the test predicted the following color:

Picture from GEDmatch
My eyes are a a lot lighter in color overall, especially near the outside of the iris, but the brown in the eye above is in my eye around the pupil.

My eye without flash (left) and with flash.
I did read their page on accuracy which says, "FTDNA Illumina and Ancestry.Com results may provide a prediction, but generally there are not enough of the necessary SNPs for it to be accurate."  That being said, I think it was a pretty close match.  Not exact, but close.

The Predict Eye Color test doesn't really tell me anything about my genetic ancestors, but since becoming interested in genetics, I have discovered that my brown eyes are not actually brown at all, but amber.  Pretty neat!  Maybe I should change my driver's license.

The test says, "Read rules from top to bottom. In some cases, a rule cancels out results from rules above it."  The rules are based off of the SNP's (single-nucleotide polymorphism- see SNPedia).  But basically, as one reads down the results of the test, a result can be canceled out.  So, though one result lists a "weak amber gradient", the VERY next result lists "inhibit weak amber gradient."  ROFL!!!   But as you can see from my picture, I do have quite a bit of amber in my eyes.

One result lists that I have a gray ring around the outer edge of the iris, which I do.  I didn't even realize that I had that!!  How neat-o!!

Another fun test is their Rare SNP (Minor Allele) mutation test.  Now, we all have genes that have mutated.  This does not qualify you to join the X-Men (so sorry).  It does qualify you to learn the various diseases that may occur because of these mutations.  I will keep in mind that my DNA may indicate that I should really keep an eye out (at least while they are working) for signs of retinal and macular degeneration.

I am no expert at genetics and so I am going to be participating in some GEDmatch groups at Facebook to learn more about how to interpret the results.  Pretty cool stuff.
Posted by Jeannie at 10:52 PM 2 comments

Who is the father of Henry Weaver VAN SYCKLE? 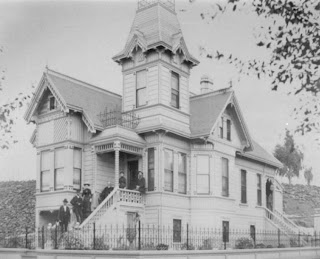 I have a biography on Henry Weaver Van Syckle, as well as his obituary, but I have been stuck on his ancestry for a long time now.

The biography lists his birth place as New York (born on the Mohawk River) on March 12, 1830. The oldest of three children, Henry's father died when he was just a boy.  The bio lists that his mother remarried when he was nineteen, and then Henry moved out west with his uncle, Solomon Hasbrook Burger.  And so I have assumed his mother's maiden name was Burger.

What I am hoping to discover is the following:

An Index Is Great, But An Image Is Better

A few years back, Ancestry.com released the Missouri Marriage Records, 1805-2002.  Finally, I was able to track down the marriage dates for my dad's grandparents, James and Nannie Brown.  I learned that they were married in May 1902, which was about the time I had expected.  Great!  The end. 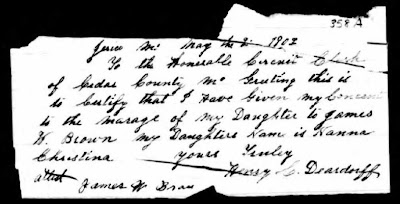 "To the Honorable Circuit Clerk of Cedar County Mo.
Greeting this is to certify that I have given my consent to the
marage (sp) of my daughter to James W. Brown.
My daughters name is Nanna Christina.
Your truley (sp) Henry C. Deardorff"

When Nannie's sister was married in 1908, both parents signed a consent note:

I have no picture of either ancestor, but I am very happy to have a copy of their signatures!
Posted by Jeannie at 7:43 PM 0 comments

Jeannie
I'm just trying to be a good bunny.